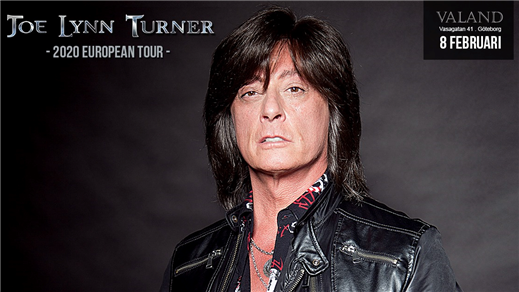 JLT, as he is known and best remembered for his work with guitarist, Ritchie Blackmore, in Rainbow and Deep Purple. JLT is known to his fans all over the world as ‘The Man With The Golden Voice’.

The 3 studio albums ‘Difficult to Cure’, ‘Straight Between the Eyes’, ‘Bent Out of Shape’ that JLT co-wrote and recorded while in Rainbow during 1980-1984, featured singles ‘Street of Dreams’, ‘I Surrender’, ‘Stone Cold’ etc. They would help catapult the band to a higher level of commercial success and Top 40 hits in UK and USA. In 1987, JLT was able to stimulate the career of another guitar virtuoso Yngwie J.Malmsteen. Their collaboration on the ‘Odyssey’ album further solidified Joe Lynn Turner’s place as a prolific songwriter, and his voice was highly sought after for other later projects such as Mother’s Army, Brazen Abbot, Big Noize, and Sunstorm, and in fronting bands like Over The Rainbow and Rated X.

In 1989, he reunited with Ritchie Blackmore and joined Deep Purple to record the album ‘Slaves and Masters’ ushering in an exciting and fresh sound to a band who influenced him growing up and to which Blackmore often refers to this recording as being one of his favorite Deep Purple albums to date.

JLT also enjoys his esteemed status as a solo artist in the USA, Japan, Russia, Turkey, Greece, and Bulgaria where there he has appeared on national television numerous times. In 2015 JLT was a special guest in the Finals of ‘’The X Factor’’ TV show in Bulgaria. JLT continually performs to worldwide audiences in several big named festivals in Europe including, “The Original Rock Meets Classic,” “Icons of Rock,” “Rock Meets Classic,” “Wacken,” “Rock of Ages,” and “Sweden Rock Festival.”

In recent years, JLT has also received recognition and distinguished awards around the world for his contribution to World Art and his involvement with charitable organizations. He was named Cultural Ambassador to Bulgaria in 2015. That same year, he also accepted the Legends of Rock Award in Italy, and the Peacemaker Award in Crimea for the promotion of peace and outstanding contribution to World Art. And in 2016, he received ‘’The Man With A Golden Voice Award’’ in Peru.