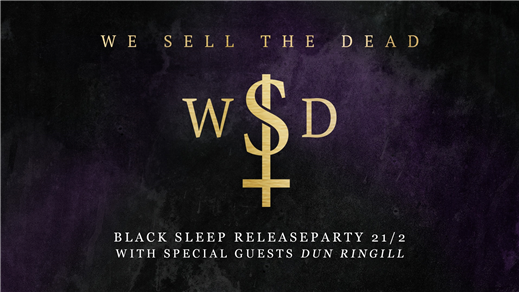 We Sell The Dead: We Sell the Dead started in 2016 as an idea from In Flames and Engel guitarist Niclas Engelin to write a different kind of music than he was used to from those two bands. Niclas had already been working with bass guitar player and singer Jonas Slättung in the band Drömriket, and the two had been friends since childhood, playing in and out of bands together since way back. Jonas wrote the lyrics and the melodies to Niclas’ heavy riffs. Together, they started the process of what was to become We Sell The Dead’s first album, Heaven Doesn’t Want You And Hell Is Full.

Their old friend Apollo Papathanasio, the frontman for Firewind and Spiritual Beggars among others, was the only choice for lead singer, as he possesses one of the best voices in Sweden. He brought class and power to the band.

On the first album, the drummer’s seat was filled with the majestic Gas Lipstick, former member of HIM. When it was clear to all that the pressing schedules and geographical distances (Gas lives in Finland) was too great an obstacle to overcome, Gas unfortunately had to be replaced.

Enter Oscar Nilsson, drummer in the band Engel, and owner and producer of Crehate Studios, the studio where WSTD had recorded their first album. Oscar, hailing from the north of Sweden and with a steady and cool approach to drumming, was the natural choice as Gas’ replacement. Finally, Petter Olsson, who played keyboards on the first album, was asked to join We Sell the Dead as a full time member – an honour he quickly accepted. With Moogs, Hammonds and a virtuoso piano playing Petter rounds up the band perfectly.

Dun Ringill: When The Order of Israfel took a two year break from September 2017, the rhythm section Patrik Andersson Winberg (Bass) and Hans Lilja (Drums, (also in Lotus)) grabbed the chance to create new music again together with Patrik's old band mate from the Doomdogs era, Tomas Eriksson (Intoxicate and ex Grotesque). Of what started as a dark and doomy project with Nordic folk influences, creating music with big harmonies and present them with lyrics in the land of evil and darkness that were hiding behind a closed door in the mind of Winberg, became something bigger and your new favorite Swedish Heavy Doom Rock band was born: Welcome DUN RINGILL, who have now released their debut album “Welcome” via Argonauta records. A new single will be released with a new video in March-20.