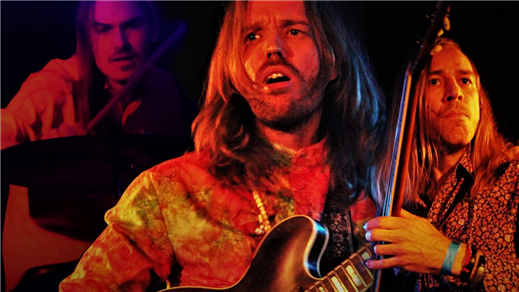 THE SONIC DAWN The Sonic Dawn is a rock band from Copenhagen, Denmark, known for their eclectic psychedelic style and prolific touring of the European continent. The group was formed in 2013 by childhood friends Emil Bureau, Jonas Waaben and Niels ‘Bird’ Fuglede. They have released three albums, which have been noted for their strong melodies and effortless blend of musical genres, from jazz to heavy acid rock. A fourth full-length is out in 2020 on Heavy Psych Sounds.

Enter the Mirage is arguably the most blazing and powerful album yet by The Sonic Dawn. It has an unusual live feel for a studio album, packing much of the raw energy and electricity that has made The Sonic Dawn’s psychedelic concerts famous in the rock underground. Enter the Mirage’s overall theme is freedom. It is about visions that may seem too distant to be real, but only those who take the trip will ever really find out.

SVVAMP Svvamp’s self-titled debut was a breath of fresh air -- unpretentious and free, primordial homespun classic rock that landed in the Top 20 Albums of 2016 in the Doom Charts consortium of writers and radio. The most common remark being just how genuine and uncontrived it sounded, unlike most bands that posture and mimic the sounds of yesteryear. The obvious comparison to the groundbreaking psychedelic albums of the late 60s, when artists began experimenting with studios moving from 4, to 8 to 16 tracks, is fitting here, too. � Svvamp is three friends -- Adam Johansson, Henrik Bjorklund and Erik Stahlgren, all of whom share lead vocal duties -- drawn together for the sake of jamming and a love of rock, folk and blues. Their resulting heavy psych sound bears hints of Cream, Eric Bell-era Thin Lizzy, CCR and Crazy Horse.