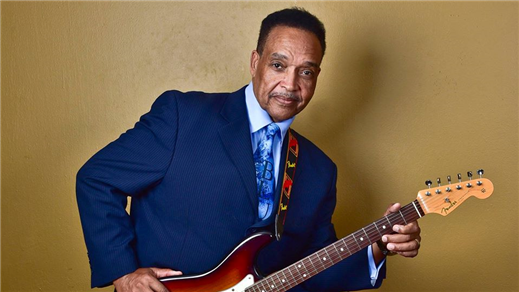 Johnny Rawls is a soul blues legend. In fact, the term “soul blues” was invented to describe his music. With a career spanning more than 50 years, he’s done it all. He’s an internationally recognized recording artist, music producer, and songwriter who tours extensively throughout North America and overseas.

The Blues Music Awards, Blues Blast Awards, Living Blues Awards, and the W. C. Handy Awards have all acknowledged Johnny with multiple awards and nominations, including Soul Blues Album of the Year and Soul Blues Artist of the Year. Living Blues Magazine described him as a “soul-blues renaissance man” when he was featured on the cover in 2002. Johnny is honored to be mentioned on two markers along the Mississippi Blues Trail – one in Hattiesburg, MS marking the Hi-Hat Club, and another in Rocklin ME marking the migration of blues from Mississippi to Maine.

Born in Columbia, Mississippi in 1951, Johnny grew up in Purvis (near Hattiesburg) and Gulfport. Johnny’s interest in music began in early childhood. He started out playing clarinet in the school band when he was in 5th grade. Over the next couple of years, he graduated to saxophone, trumpet and other instruments. Johnny became interested in guitar when he heard his grandfather playing one Christmas morning and by age 13 was playing guitar seriously. Johnny’s high school band teacher had a professional band that backed touring soul artists and asked Johnny to join his band as a saxophone player. This began Johnny’s professional career, and at age 15, he was backing artists including ZZ Hill, Little Johnny Taylor, Joe Tex, and The Sweet Inspirations on their tours in the Southeast. In the mid-1970s, Johnny became the band director for soul singer O.V. Wright, and toured with O.V. until his death in 1980. Wright’s band, under Johnny’s leadership, continued to perform as the Ace of Spades band for several years. Then, Johnny became the band director for Little Johnny Taylor.

In 1985, Johnny began touring as a solo artist and made his first solo recording. A prolific songwriter, hundreds of Johnny’s songs have been recorded, He has released more than 15 albums since his debut solo album, Here We Go, in 1996 on JSP Records. In the late 1990’s Johnny worked as an arranger and record producer for JSP. Johnny has released albums under various labels, including JSP, Catfood Records, Third Street Cigar Records, and his own label Deep South Soul, which he created in 2002.

The Blues Music Awards (and its predecessor, the W.C. Handy Awards) frequently recognize Johnny’s work. To date, ten of Johnny’s albums have been nominated for Soul Blues Album of the Year, with “I’m Still Around” winning in 2019 and “Ace of Spades” winning in 2010. Johnny has been nominated for Soul Blues Male Artist eleven times, and received one nomination for Song of the Year. Roots Music Report declared Johnny’s 2017 release, “Waiting for the Train,” one of the top 50 blues albums of the year. Johnny also has multiple nominations/awards from Blues Blast Magazine and Living Blues Magazine.

With his 2018 release, “I’m Still Around,” Johnny returned to his roots in Mississippi Soul Blues. All the songs on this album were written and arranged by Johnny, and reflect his favorite subjects – falling in and out of love, making love, and enjoying and being thankful for life. Johnny is extremely proud to have won the Soul Blues Album of the year at the 2019 BMAs for this release.