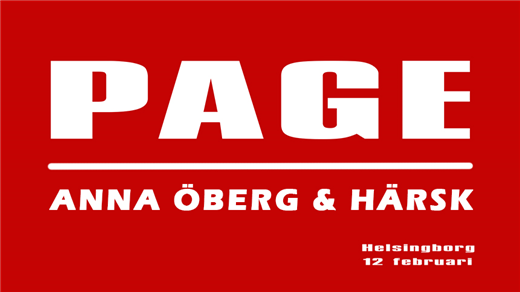 https://www.facebook.com/PageElektroniskPop/ Formed in 1980 by Eddie Bengtsson and Marina Schiptjenko, soon joined by Anders Eliasson, the band quickly gained underground cult-status releasing many singles such as Dansande man, Som skjuten ur en kanon, Blå fötter and Som en vind. Though most of their important influential work was released in the 1980s their first album, the self titled Page, was released in 1991. Page continued releasing music throughout the 90's but is still most fondly remembered in the Swedish synthpop scene for their early singles, especially Dansande Man. Though the band has never officially disbanded, it has been remarkably quiet since a performance at SEMA (Swedish Electronic Music Awards) in 1999 when the band promised nothing new would ever be released under the name Page. However, a compilation covering their two decades of work was released in 2000. After a decade of silence, in 2010 Page released an album of newly recorded material called Nu, and performed two tracks live on Swedish TV show Nyhetsmorgon in May 2010. The album reached number 34 on the official Swedish album chart, Sverigetopplistan, following its release.