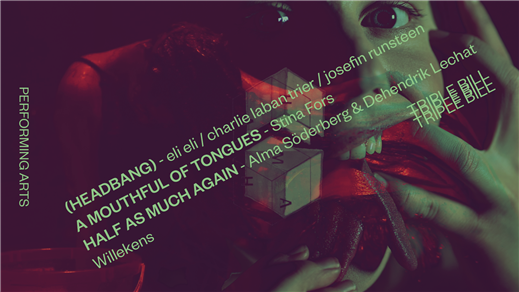 For this evening we’ve invited the top of the top from Intonals performing arts department. Names and acts you’ll never cease to forget and unfortunately for some of you - never cease to regret missing out on! Utilizing every inch of Inkonst we present three different performances: (headbang) by Eli Eli, Charlie Laban Trier and Josefin Runsteen, A mouthful of tongues by Stina Fors and Half As Much Again by Alma Söderberg and Dehendrik Lechat Willekens.

With the Triple Bill we’re ending the performing arts season as well as announcing the spring season program - simply going out with a bang!

A MOUTHFUL OF TONGUES - STINA FORS

In the performance A mouthful of tongues, the mouth becomes the theatre. Experimental vocal techniques such as growling, ventriloquism, tongue work-outs, dinosaur calls and more create a journey where many bodies and sounds are brought into dissociative relations. The body is not in relation to its voice or its sound. Confusion comes and goes and manners of communication fracture into one another. This performance celebrates the mouth as a potent channel where communication can be formed, expressed, torqued, destroyed, and resurrected. We hear fragmented stories, thoughts and emotions of other places, of other creatures, of something that sounds like English but is not. A mouthful of tongues premiered in June 2022 at brut Wien in Austria.

HALF AS MUCH AGAIN - ALMA SÖDERBERG & DEHENDRIK LECHAT WILLEKENS

Half As Much Again is a continuation of musical explorations by Alma Söderberg and Dehendrik Lechat Willekens. The title is a linguistic construction which captures a specific polyrhythm; in this case it reflects a relation of (to speak in whole numbers) two against three. The application of polyrhythmic thinking and doing has occupied Alma and Dehendrik for several years in several projects and collaborations. At Inkonst we want to share new sounds that we have been making and putting together in the spring, summer and fall (and, come to think of it, winter as well, actually) of the memorable year 2020. Here is a more descriptive way to put into words what we will be presenting: sample based rhythms and groove based voice.

Our gratitude goes out to the people of Inter Arts Center and Inkonst who trusted us with their space and time. This project has received funding from Konstnarsnämden.

(headbang) is two dancers situated in a large transparent cube and a live musician with her full drum set.

They engage with each other’s rhythms. The musician flows through a wave of whispers, strong percussions, loops and screams. The dancers are banging their heads. Later they transform into slugs, intimate whippers, into stain-makers.

Together the performers bring in discourses around witches, vulnerability, and care through practices that are usually connoted with the more masculine dominated heavy-metal scene. They invite the audience into a space of grief, celebration and ecstasy.