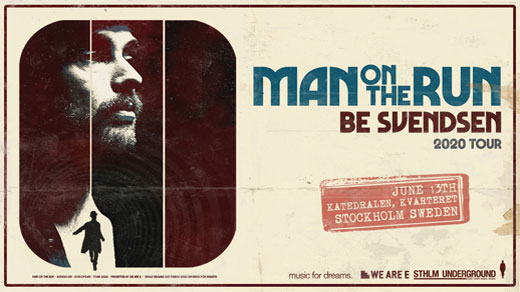 After his highly anticipated 2019 album, ‘Between A Smile And A Tear’ and following a successful world tour, Danish musician Be Svendsen announces dates for a new concerttour named ‘Man On The Run’.

Known for his spell-binding music and with his delicate sense atmosphere and style, Be Svendsen will create an intimate setting for dynamic and melodic depth.

Performing this storytelling live-set on an open stage, backed by mesmerizing visuals crafted for the tour, Be Svendsen invites the audience to step closer into his universe.

A new single titled ‘Man On The Run’ will be released March 15th and will be the first single from Be Svendsen’s next album scheduled to be released Winter 2021.

The tickets includes entrance to the afterparty at Kvarteret!