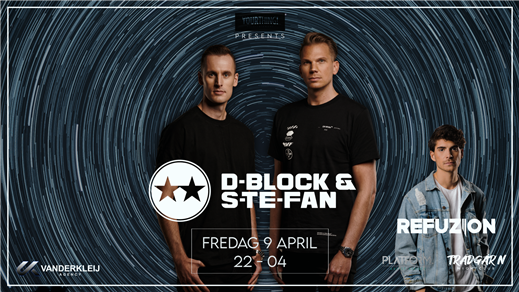 For over 15 years D-Block & S-te-Fan has been a game changing duo in Harddance history. Currently operating stronger than ever whilst reviving their love for the harder styles, they are yet again on top of the scene. After creating landmarks in Hardstyle with albums like "Music made addictz" and "Rockin your mind", they rediscovered their love and passion for the harder styles in 2017 with the hitrelease of the album "Antidote". Since then on every song has been getting better and better, and by the sound of Angels & Demons, Twilight Zone and Ghost Stories they found a unique way to combine Melodies with Energy. With their celebration of 15 years of Hardstyle and their new formed liveact Ghost Stories there is a lot more in store for many years to come.. WE DON'T STOP!