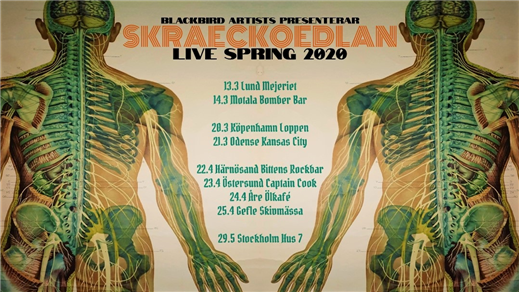 Nominated to P3 Gold Awards 2019 best rock/metal Since their formation in 2009, the young members of Skraeckoedlan have left a big footprint in the Swedish underground scene. In 2011 the critically acclaimed debut album “Äppelträdet” was released on Transubstans Records. The follow up is planned on beeing released sometime during early 2015.

Skraeckoedlan serves you a buffet of heavy fuzz rock with its roots deeply planted in the riffing of Black Sabbath, the 90’s pop choruses of Weezer and Mastodon’s modern progressive metal. Combine this with lyrics in Swedish and a cryptozoological theme and you have a fraction of a description of Skraeckoedlan’s sound. We’re thrown on a musical space ship in orbit around the solar system, where the melodies are in the centre and the dreamlike atmosphere always stays persistent.

Since their inception, Skraeckoedlan have done over 120 shows in both Sweden and the rest of Europe. Mostly on their own but also as a support act for Kylesa, Orange Goblin and Truckfighters.