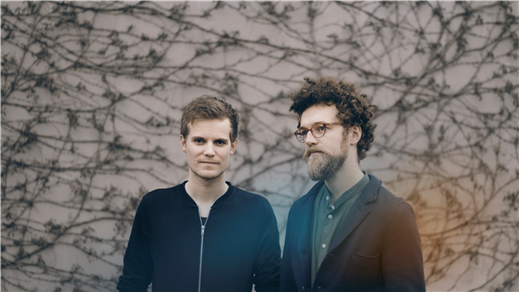 Svaneborg Kardyb is one of Danish jazz' rising stars. After the release of their debut album ‘Knob’ in the spring of 2019, followed a staggering year of massive media attention, sold out shows in Denmark and internationally that received amazing reviews. Moreover, at the Danish Music Awards Jazz 2019 they won the award for ‘Talent of the Year’ and the award for ‘Danish Jazz Composer of the Year’ for their meditative grooves, their natural approach to melody and the exquisite interaction between them (ed.).”

In the autumn of 2020, the duo released their sophomore album Haven – an homage to nature. The music on Haven is created during the earliest hours in the morning, over the blackest coffee and is a minimalistic expression of electronic and acoustic sounds uniting, where catchy tunes meet Nordic vibes in a dreamy, groovy universe. ‘Haven’ is set for an international rerelease, on British label Gondwana Records (Hania Rani, GoGo Penguin, Mammal Hands) in the beginning of 2022 and will be followed up by the third studio album from Svaneborg Kardyb late 2022.

“Svaneborg Kardyb’s album is the opposite of the fast, false world of social media and shallow ideals. The compositions are not flashy or driven by ego, they are simple, but very touching. It is the delicacy of the playing, the natural affinity to melody and the exquisite interaction between Nikolaj Svaneborg and Jonas Kardyb that makes the album work." Said about the album Knob, DMA JAZZ 2019, by Debra Richards, member of the DMA Jazz Academy

“The strength of Svaneborg Kardyb's compositions is the intimate intensity and responsiveness that one senses in the interaction between the two gentlemen and their respective instruments. It sounds safe and balanced on their second album, Haven, when keyboards and drums in community explores where simple melodies and muted sounds can lead each other.” Information, Danish National Newspaper