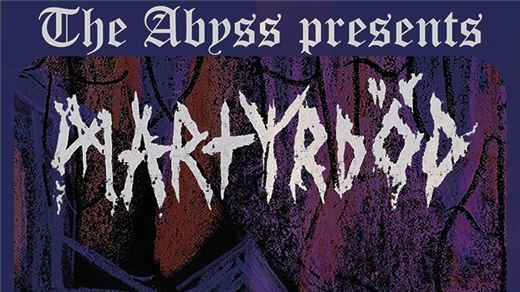 We’re pleased to announce MARTYRDÖD for February 7th! Not seldom tagged with labels such as “blackened crust”, Martyrdöd’s furious metalpunk or punk metal sound has earned the band a scene transcending following for 18 years now. Last year saw the release of seventh album “Hexhammaren”. As described elsewhere, Martyrdöd “manages to remain heavily unique in their filth-ridden approach. While undeniably influenced by acts like Anti Cimex, Bathory, and Totalitär, the band intertwines their crust roots with sinister, haunting soundscapes and unique blackened riff attacks”.

Supporting MARTYRDÖD this night is Lidköping quintet M:40! We sure could have had a worse match than the d-beat darkness heard on third and latest album “Arvsynd” (2019). "M:40 deliver! Full load in front of the bib! The big names like Wolfbrigade and Martyrdöd make the rounds in punk/hardcore mainstream, but M:40 are not a bit worse. They are absolutely at eye level and reflect the current upswing in crust excellently. "Arvsynd" is a powerful album!" - whiskey-soda.de