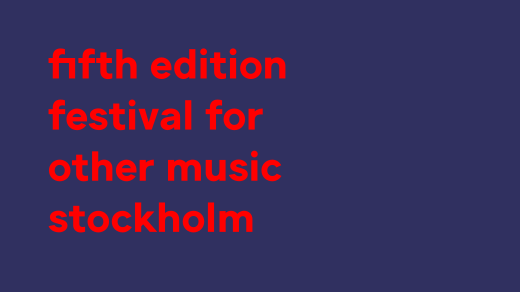 NINE pieces by Eliane Radigue (who turns 90 in january!) including a brand new work for quintet — OCCAM HEXA V — commissioned by the festival. Thrilled to be presenting more of her music again after the extraordinary Occam Ocean for concert for orchestra in 2017. Big thanks to Silvia Tarozzi, Julia Eckhardt, Deborah Walker, Nate Wooley and Enrico Malatesta and of course Eliane for being up for this. This will open each night.

[Ahmed] — the quartet of Pat Thomas, Seymour Wright, Joel Grip and Antonin Gerbal — will play the closing set ALL FIVE NIGHTS. These kind of multi-night runs are all too rare these days and I can't think of a group who could do more to imagine the possibilities of this opportunity than [Ahmed].

For the first two nights we are collaborating with Thanatosis produktion to present new work by Magnus Granberg — 'night will fade and fall apart' — for a new ensemble with Josefin Runsteen, My Hellgren, Finn Loxbo, Ryan Packard, John Eriksson and Anna Christensson.

The next two nights will host solo vocal performances by Sofia Jernberg (friday) and Pär Thörn (saturday) and on sunday we welcome Fylkingen mainstays WOL (Wenche Tankred and Lovisa Johansson) for something uncategorisable (and as yet unknown).