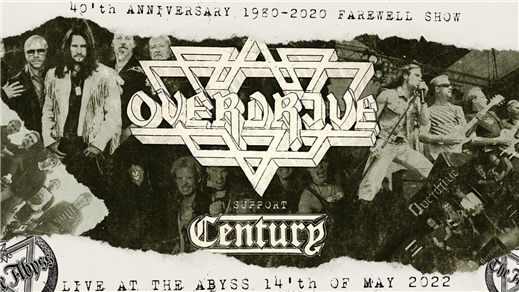 2020 marks the 40-year anniversary of classic Swedish heavy metal band Overdrive! Covid put a stop to Overdrives plans to hit the road and celebrate, but now the time has come! Formed in 1980, the band still features three original members! Albums like “Metal Attack” and “Swords And Axes” have been re-issued many times and are still in demand. The band’s live show has always been an action filled event with lots of smiles mixed with heavy riffs and chugging rhythms. Well, now it’s time to say goodbye. The band has however to do it in style – to give it one most last chance to see the band on stage. The plan is to make 2022 one big heavy metal party! To hit as many stages as possible, to bring The Swedish Metal Attack!

Support comes from Stockholms hot new comers "Century". A new 7" is out in March on Electricassault Records.