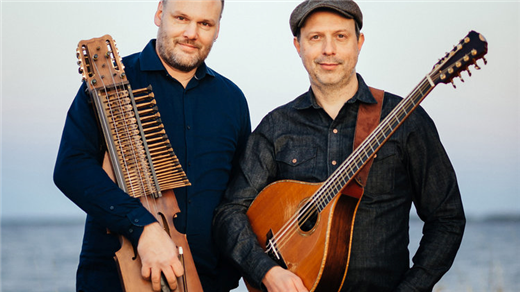 Two of Sweden’s most established folk musicians united in the duo Hazelius Hedin. They play and sing their Swedish folk music with passion, rare ease and unquestionable presence - it’s impossible to remain unaffected.

Esbjörn Hazelius and Johan Hedin both grew up in the south of Sweden, where the traditional couple dance polska is prevailing. Their repertoire includes everything from medieval ballads, sailor songs, love ballads and instrumental dance tunes. Moreover, Hazelius and Hedin pass on the tradition through their own compositions. They arrange the music carefully often inspired by Esbjörn’s Irish tradition of music arranging, and they constantly look for new instrumental harmonies.

On their latest album, Jorland, which was nominated for the Swedish Grammy 2019, the listener is invited not only to a collection of traditional dance tunes, but also newly composed songs. Everything performed with the magic and virtuoso interaction that characterizes Hazelius Hedin.