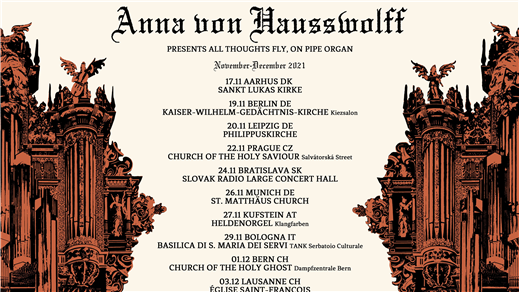 With the organ as her main weapon, Anna von Hausswolff has established herself as one of the most uncompromising Swedish artists active today. The Gothenburg-based artist had her big breakthrough in 2009, when she – without having even released a debut single – filled Annedalskyrkan to the brim for Way Out West. The following year came the critically acclaimed debut album Singing from the Grave. And while organ may seem an unusual instrument for pop music, with subsequent records von Hausswolff repeatedly exhibited artistic visions as big as the soundscapes themselves. 2015's The Miraculous – recorded in Studio Acusticum in Piteå on Sweden's largest concert hall organ, consisting of 9000 pipes – was a fabulous journey through barren, gothic soundscapes, simultaneously challenging conventions while proving surprisingly popular. Anna von Hausswolff does not long for legends – she is creating them from what’s hidden in the human soul.